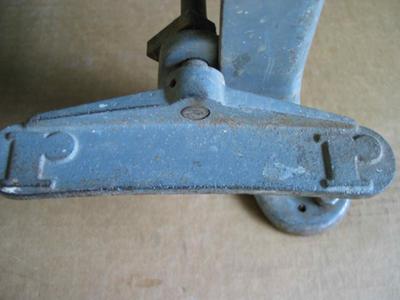 I recently purchased this Delta jointer. It appears to have an early day 'movable base' minus the wheels/casters on which it rolls. Evidently, the over sized 'wing nuts' move the wheel assembly up and down with a 180º flip one side to the other merely by pressing down with your toe.

I would like to see a complete assembly in hopes of restoring this feature to my outfit. I sent a question to Delta (c/o Dewalt, who may now own Delta, for all I know) and was told Delta did not manufacture a movable base. The 'r' cast into the 'wing nuts' would,also, seem to indicate it wasn't Delta.

Any ideas? Could it be Rockwell? At any rate, if anyone has any familiarity with such an arrangement, I would sure appreciate a lead.