These sold quickly and as word spread of the quality of these machines, demand increased. Mr. Smith decided to leave the lumber industry and engage full time in the manufacturing business. 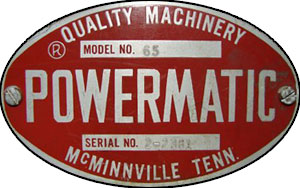 The growth of the company demanded a move to larger facilities. In 1928, Mr. Smith named his company Powermatic, and moved his business into an old blacksmith shop in town. He introduced several new products including sanding machines, drill presses, and the industry's latest invention, the Tilting Arbor Table Saw.

Through the 1940's several progressively larger factories were occupied as the demand for Powermatic products grew. In 1954, the company, now run by Mr. Smit'’s sons, bought land on the edge of town and built a 38,000 square foot facility specifically tailored to their operations.

In 1958, Powermatic took a unique step in the industry by establishing its own 50,000 square foot foundry. This enabled the company to keep tight control on the precision and quality of its castings and to ensure that the Meehanite ™ process, still in use today, would put the company at the forefront of the woodworking machinery manufacturing process for years to come.

In 1966, the Smith brothers sold their business to Houdaille Industries. Although owned by a Fortune 500 Company, Powermatic continued to be influenced by the local community and run in autonomous fashion.

In July 2001, a "NEW" Powermatic emerged and a strategic business decision was made to pursue the general purpose industrial woodworking machinery market much more aggressively.

Contribute to this Site - Share Your Powermatic Tool Photos

---- Help build this collection of Free Resources for Woodworkers! ---