Hand planes are tools for shaping wood. They are used to flatten, reduce the thickness of, and smooth the surface of a rough piece of lumber. Planing is also used to produce horizontal, vertical, or inclined flat surfaces on work pieces usually too large for shaping. Many special types of planes are designed to cut specific shapes of moldings or to cut joints. 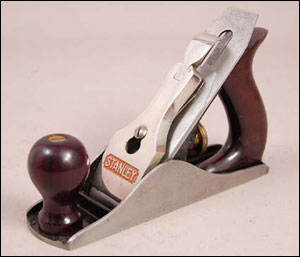 Hand planes are generally a combination of a cutting edge or plane iron held in a firm body that when moved across the surface of the wood, takes a relatively uniform and thin shaving. Depending on the length of the plane, when moved over the surface, removes the high spots in the wood.

Planes are designed so the the cutting edge or plane iron is held at an angle to the surface of the wood. The plane iron extends beyond the bottom surface or sole of the plane and slices off thin shavings of wood when pushed across the surface.

Hand planes have been around since ancient times. Early planes were made of wood with a mortise (rectangular slot) cut across the plane body so the blade could protrude below the surface of the base. The depth of cut was adjusted by hand and the blade was held in place with a wooden wedge.

In the 1860's, Leonard Bailey (Bailey Planes) began producing a line of cast iron-bodied hand planes. Bailey was later bought out by the Stanley Rule & Level Company. An employee at Stanley Rule & Level Company, Justus A. Traut and others are largely responsible to improvements to the iron bodied planes. Traut's name is on many hand plane patents on behalf of Stanley.

The Bailey and Bedrock designs are the basis for most hand planes manufactured today and they have changed little since the early 1900's. The Bailey design is still manufactured by Stanley Tools today. There were many differently types of hand planes originally manufactured. The advent of many power tools such as the portable router, made many hand planes obsolete and they are no longer in production.

Parts of a Hand Plane

Most iron body planes consist of the following parts:

Plane Iron - the plane iron is a plate of steel or blade with a sharpened edge which cuts the wood.

Lever Cap - the lever cap replaced the wooden wedge. It holds the plane iron securely in place and against the body of the plane.

Depth Adjustment Knob - the depth adjustment knob controls how far the plane iron extends through the mouth. This determines the depth of cut.

Knob - Many planes have a wooden or metal know at the front of the plane.

Cap Iron or Chipbreaker - the cap iron serves to make the blade more rigid. It breaks the chips or curls the shavings as they pass up over the blade through the mouth of the plane.

Lateral Adjustment Lever - the lateral adjustment lever is used to adjust the plane iron by skewing it so the depth of cut is uniform across the mouth of the plane.

Tote - The tote is the handle at the back of the plane. On early iron planes it was typically made of rosewood or Cocobolo hardwood.

Finger rest knob - small block planes typically have a finger rest instead of a knob. The planes are so small they are typically used with one hand. The plane is held in the palm of the hand while the index finger rests on the finger rest to help guide and control the movement of the plane.

Frog - the frog is an iron wedge that is fastened to the body of the plane. The plane iron rests on the wedge which holds the plane iron at the proper angle. It slides forward and backward to adjust the gap between the cutting edge and the front of the mouth. The frog is usually screwed in place on the inside of the sole of the plane. On some planes it is only adjustable with a screwdriver when the plane iron and cap iron are removed. Other planes have a screw mechanism that allows the frog to be adjusted without removing the plane iron.

Depending on their size, most planes are categorized as either bench planes or block planes.

Bench planes are characterized by the plane iron with the bevel facing down and attached to the cap iron.

Block planes are characterized by the plane iron with the bevel facing up. It also does not have a cap iron. The block plane is usually a smaller, shorter tool that can be held with one hand.

Different types of bench and block planes are designed to perform specific tasks with the name and size of the plane being defined by its use. Bailey and later Stanley planes were designated by a number respective to the length of the plane.

Scrub Plane - Scrub Planes are for planning down to a rough dimension any board that is too wide to conveniently rip with a hand saw, an operation that is sometimes called "hogging." This is made possible by the shape of the extra heavy cutter, the cutting edges of which is round instead of square.

Jointer Plane - A Jointer Plane is a finishing plane for large surfaces and is invariably used to true up the edges of boards so that they can be closely fitted or joined together.

Jack Plane - A Jack Plane is used to true up the edges of a board in the rough and prepare it for the Fore or Jointer Plane.

Fore Plane - A Fore Plane is simply a shorter jointer, and begin lighter, is preferred by some woodworkers to the longer plane.

Smooth (Bench) Plane - The smooth plane is used for finishing or smoothing off flat surfaces. Where uneven spots are of slight area, its short length will permit it to locate these irregularities, leaving the work with a smooth surface when finished.

Planes may also be classified by the material of which that are made.

Wooden planes are made entirely of wood except for the blade. The plane iron is held in place by a wooden wedge and is adjusted by striking the plane with a hammer or mallet.

Transitional planes have a wooden body with a metal casting attached to it to hold and adjust the plane. These first appeared as a transition from the early all wood planes to the iron plants.

Metal or iron planes are made mostly of wood except the handles and knob which are typically made of Rosewood or Cocobolo or plastic.

There are many type of cutting tools that are also know as planes.

Spokeshave - a tool with a very short sole, either flat or curved. A spokeshave is used for smoothing curved surfaces.

Circular or Compass Plane - Compass planes have flexible steel faces which can be accurately adjusted for planing the inside or outside of circles. The cutters are adjustable endwise and sidewise.

All Other Old Woodworking Tools Articles

This site proudly build with Site Build It!