A Radial Arm Saw is basically a circular saw mounted on a horizontal arm that can slide from front to back. It is used mostly for cross cutting wood, however, on most radial arm saws, the saw or the "head" can be pivoted 90 degrees so that it can be used to rip wood with the grain. 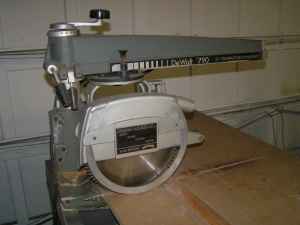 The saw head can also be tilted to cut bevels and the radial arm can be pivoted to cut miters. The cradle that carries the saw head or motor under the horizontal arm is known as the yoke.

The radial arm saw was invented by Ray De Walt in 1923. De Walt was the founder of DeWalt Tool Co. and one of the premiere manufactures of quality radial arm saws.

The radial arm saw is typically used for cutting long pieces of stock to length but it can also be adapted to perform operations found on many typical stationary woodworking tools including the table saw, disc or drum sander, shaper, and miter saw.

About the only cut it can't make is a curved cut like that done on a band saw or scroll saw.

Radial arm saws could be fitted with dado heads, molding cutters, and router bits for making a variety of cuts and joints. Some could also be fitted with disc and drum sanders making it a very useful tool in the shop. Because of it's versatility it was one of the favorite tools of the home woodworker.

The DeWalt company stopped manufacturing radial arm saws for the US market in 1985. There are still many radial arm saws in operation, however, it has been largely replaced in the industry by smaller and more accurate miter saws. 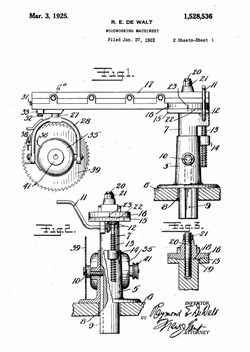