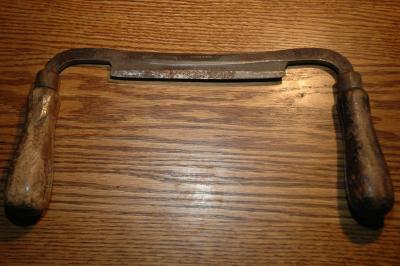 I picked up this draw knife along with a bucket of other draw knives, chisels, and lathe tools at an estate sale. It has the name James Swan stamped into the blade across the top. It also has the number "6" stamped in the blade which I believe indicates the width of the blade. The handles on this draw knife are about 5 inches long and it measures 11" wide overall.

After doing some research online, I've able to find out that the James Sawn Company was located in Seymour, Conn at least in 1920 it was. The company used the Swan as a logo on their 1920 Premium Mechanics Tools Catalog. James Swan bought out the Douglas Manufacturing Company who had factories in Seymour, Conn in 1876. Swan was originally from Scotland and as of 1865, he was employed by the Douglas Manufacturing Co. I located a patent for James Swan for improvements in the making of augurs and drill that was granted in 1867. Charles Douglas was a witness.