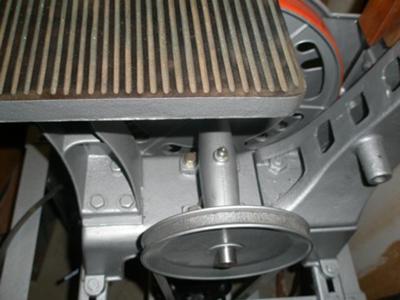 I bought this saw probably 20 years ago at a garage sale. It was in honest operating condition, although it had seen plenty of use. I believe it might have been used in a high school shop class, based on some numbers scratched into the paint, but that's just a guess; and that the person I bought it from had acquired it from the school. I had the rubber tires replaced by a machine-tool repair business, but they didn't hold up very well so I decided to replace them with the urethane ones. I ended up pretty much doing a semi-full restoration and upgrade, and it is now ready for another 80 years work.

I say that because it appears these were made in the 30s. I've done some online research but the other Walker-Turner 12" Driver series bandsaws shown differ from mine in the following ways. The ones I see that say they were made in 1930 have a one-piece frame with the bottom pulley shaft running right through the frame. Mine has a 3-piece frame; a bottom or base casting, a casting that supports the table and lower blade guides, and the upside-down "L" shape that goes up and supports the upper wheel, upper blade guide and both wheel covers (a casting is bolted on that these hinge from). The lower wheel shaft goes through a separate casting that bolts to the lower base casting. The only numbers are the ones scratched into the paint, which I take to be property numbers, and some I take to be casting numbers. The name "Walker-Turner" and "Driver" appear on the inside surface of the lower wheel pulley, along with the number "BN-18." I know this was a lower-end, handyman series sometimes sold by Sears or Wards. I forgot to mention that in the "L" shaped casting, there is provision for another jackshaft to allow a speed reduction to cut metal, I presume. It doesn't have the shaft or pulley, and I don't know if it ever did; I've seen this same provision on some of the one-piece W-T 12" Driver bandsaws listed on OWWM's website.

I'd like to know, if I could find out, when this was made and if anyone has a manual for it, I'd love to obtain a copy.

Join in and write your own page! It's easy to do. How? Simply click here to return to Delta Band Saw Restoration Tips & Stories.