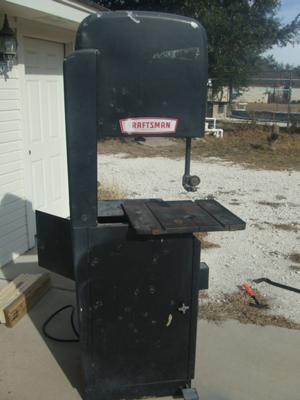 I bought this sight unseen from a school auction. Being a former shop teacher I know how used, abused and thrashed some machines get before going to auction. I had a feeling this one, because of its large size, wasn't too used and my gut was right.

I'll be replacing the six 6202 Z bearings with 6202 LL sealed on both sides. The old bearings had a grease fitting mounted on the cast iron wheels. I'll forgo that maintenance by just getting sealed ones.

Their are some missing parts and D.C. Morrison Co. out of Kentucky has them all in stock. That's a real plus since Sears has no records, parts or any other info for their machine. It dates back to early to mid 1970's but Parks started making these for Sears 20 years earlier. Sears stopped making this size model around 1979.

The motor looks a bit small for a statuesque machine like this, but it pulls over 15 amps on 110V and 7.7 on 220V. I'll have to see how it handles the resawing I'm asking it to do.

The gearing in the back makes it look like a wood/metal band saw. I see no traces of metal shavings anywhere, so it looks like its life was spent making and collecting sawdust.

This is a working saw, so I won't go overboard in the refurbishing department. Getting those bearings and blade guard and blade guides will make me a happy woodworker.